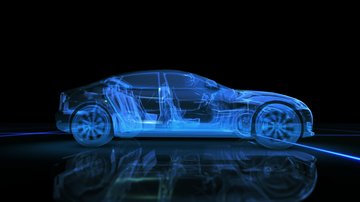 Electric vehicles (EV) continue to gain importance in the automotive industry. This includes hybrid electric vehicles (HEV), battery electric vehicles (BEV), and plug-in hybrid electric vehicles (PHEV).  With the rising importance of EVs, lubricants remain critical, but the critical characteristics of the lubricants are changing. Frequently, EVs use a driveline system where the electric motor, as well as the transmission and other driveline components, can be exposed to the lubricant.  Many manufacturers have continued to use axle oils, manual transmission fluids, or ATFs in this type of application, but this can cause problems in some cases.  For instance, The Lubrizol Corporation and Scania have published images of eMachine stators after failures that show melting of copper from shorts where the root cause was determined to be the lubricant in contact with the motor (Hunt and Prengaman, 2020; Nyman, 2021). 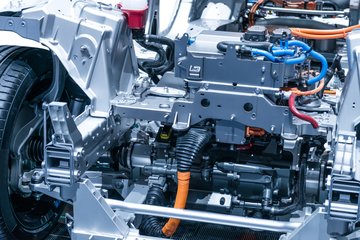 A group of SAE members with technical expertise, including employees of the Savant Group, formed to draft an Information Report about the critical characteristics for Electric Drivetrain Fluids (EDFs).  The result is draft document J3200.  This document contains guidance about the characteristics considered to be most important for selecting fluids for use where the fluid may come into contact with electrical components of EVs, such as the motor, electrical connections, or other circuits. In addition to characteristics common to all drivetrain lubricant performance, such as wide temperature range and anti-wear protection, the group identified a need for good compatibility with copper and other metals, thermal and electrical (insulating) properties, and resistance to oxidation, which are critical lubricant characteristics for compatibility with EV applications.

Tests currently used for driveline fluids were considered adequate for testing oxidative properties of EDFs, though limits may be different. Existing tests for thermal conductivity and electrical insulation properties were also considered adequate for EDFs, though they are not typically applied to driveline lubricants in non-EV applications.  While existing foam, air release, and aerations tests were thought to be useful in evaluating EDFs, the higher shaft speeds and lower sump volume could play a role. There are no EV-specific aeration tests that have currently been introduced, but the future may bring the development of equipment-specific tests if challenges are encountered in the field.

OEMs and lubricant companies have been testing rigid plastics and flexible materials for tensile strength after fluid exposure to determine compatibilities of materials known to be in the systems of interest.  In addition, a number of proprietary tests were developed for materials compatibility of motor wires with EV fluids; however, no industry-standard tests or standard specimen have been identified.  The Savant Group continues to work with a consortium of companies including Ford, The Lubrizol Corporation, and APL to determine if more broadly applicable standardized tests can be developed in this area.

The most exciting test development has been around evaluating copper corrosion properties for EDFs.  This is likely because the previously-existing tool for determining copper corrosion, ASTM D130, is considered to be ineffective for EV applications.  Where the copper in the eMachine, electrical connectors, or other circuits, is exposed to the lubricant, it is often exposed to the vapor as well as the liquid.  In addition, the temperature and exposure times in D130 are not ideal for detecting problems in EV applications.

The Conductive Deposit Test
The Conductive Deposit Test (CDT) exists to determine to what extent conductive deposits will form on exposed copper in tight spaces exposed to lubricant or vapor. Current thinking is that copper corroded from the surface can react with components of the liquid or vapor phase and deposit on the exposed copper.  If such a deposit bridges the gap between conductors at different electrical potential, a catastrophic short can form.  This could result in rapid failure of the electrical device and may explain some of the motor failures seen in the field.

A circuit board acts as the test specimen representing the exposed copper components in the EV.  It conveniently holds the spacing between copper conductors and provides connections to apply voltages and make measurements.  The circuit board is placed in a small sample of test fluid with the liquid detection circuit in the fluid and the vapor detection circuit above the fluid.  The sample is heated in a liquid bath for a duration from a few hundred hours to 1000 hours and the circuits are monitored. As conductive deposits form dendrites that connect two circuits, the resistance between the two circuits drops and is monitored in real-time.  If the resistance drops below a critical value and a given time, the fluid is considered to have failed by showing conductive-deposit-forming tendencies. This can occur in the vapor phase, the liquid phase, or both.  In addition, a continuity loop is monitored to ensure that high resistances maintained are not the result of a break in the circuit as copper is corroded.  Finally, the temperature of the liquid and vapor phases are monitored to provide evidence that test conditions have been properly maintained.

Figure 1. Dendrite growth on this circuit board during a Conductive Deposit Test resulted
in an electrical short between two circuits and a failing resistance value.


For the past two years, Savant Labs has been actively developing this test with assistance from the industry consortium previously mentioned. Repeated tests have distinguished between oils known to have good EV performance and oils known to have poor EV performance and are now offering this test to the industry. Earlier this year a draft Federal Test Method was submitted for this test, and it is referenced in the draft SAE J3200 Information Report.

The Wire Corrosion Test
The Wire Corrosion Test (WCT) is also available at Savant Labs.  This patented test has been under development by The Lubrizol Corporation for the past several years, and a draft Federal Test Method has been submitted.  Data Lubrizol has collected using this test has led to several interesting publications on copper corrosion in EVs.  In this test, a thin copper wire of known length and resistance is placed in the liquid and vapor phase of a lubricant sample and a small voltage is applied. The lubricant sample is heated for a period of 72 hours. The resistance of the wire in each phase is measured separately, and the corrosion rate can be calculated based on the increase in resistance.  Because this test is relatively short and the temperature can be adjusted, The Lubrizol Corporation has investigated the corrosion rate for various lubricants across the temperature range expected in EVs. One interesting finding was that the corrosion rate of lubricants responds uniquely to temperature, so an increase of ten degrees may dramatically affect the copper corrosion behavior of one fluid but not another (Hunt and Prengaman, 2020). 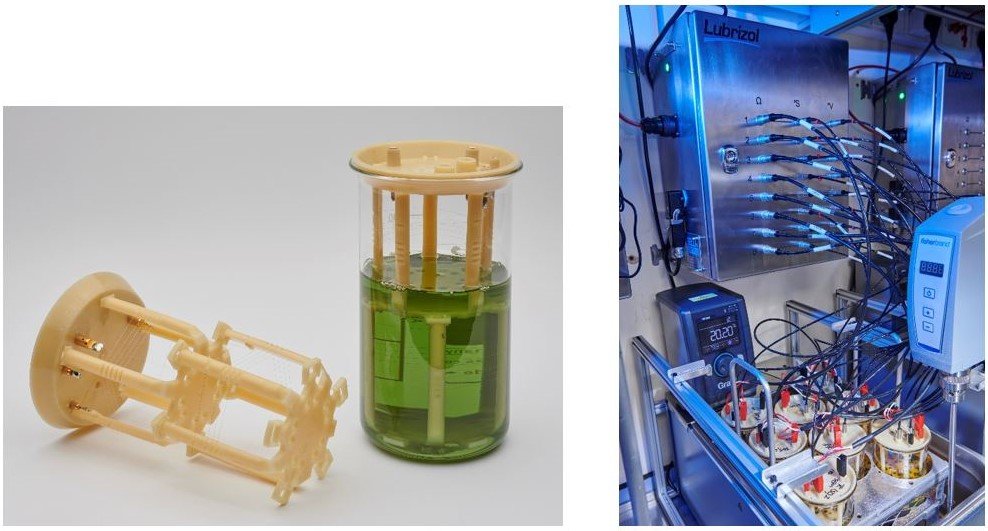 Figure 3. (Left) The wire and test fluid positioned for the WCT test. (Right) The WCT underway.  Photos provided courtesy of Lubrizol Corporation and used with permission.

Finally, the extended D130 and vapor phase copper test were developed by Afton. Unlike the other tests developed to investigate copper corrosion and deposits in EVs, these tests do not employ powered circuits. The extended D130 test simply extends the time in which the copper strip is exposed to the heated fluid to 168 hours or another desired duration. In addition to the visual rating at end of the test, samples can be withdrawn for elemental analysis by ICP throughout the test and at the end of the test.   The amount of soluble copper in the solution is an indication of the copper that has leached out of the copper strip.  In the vapor phase copper test, a copper strip hangs above the heated sample in a closed container.  After 48 hours, the strip is visually rated for corrosion.  Test methods are being formalized for these tests, and Savant Labs participated in the interlaboratory studies.  Therefore, Savant is pleased to offer the extended D130 and vapor phase copper test, as well.

The advancements of electric vehicles and their specialized lubricants are creating opportunities for innovation in fluids and fluid testing.  Savant Labs have been developing expertise in these new areas of testing by being involved with an industry consortium and working on the draft SAE J3200 Informational Report.  As the need for these tests grows, Savant is available to support our customers' needs.  Contact us for more information or to request a quote.