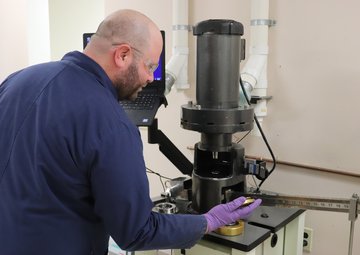 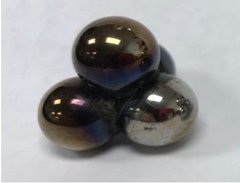 When the extreme pressure test fails, this is called welding. There are certain attributes to look for. They are: a sharp transverse movement of the friction force, an increased noise level of motor, smoking from test-oil cup, a sudden drop in the lever arm, or the motor comes to a complete stop, indicating the balls have welded.

After the test has completed the last non-seizure load (LNSL), weld point (WELDPT), and load wear index (LWI) are reported. The last non-seizure load (LNSL) is the last load at which the measured scar diameter is not more than 5% above the compensation line at the load. Beyond this point, an incipient seizure occurs, indicating a momentary breakdown of the lubricating film. The weld point (WELDPT), is the lowest applied load in kilograms at which the rotating ball welds to the three stationary balls, indicating the extreme-pressure level to the lubricants force has been exceeded. The load wear index (LWI), is the load-carrying property of a lubricant. It is an index of the ability of a lubricant to minimize wear at applied loads. 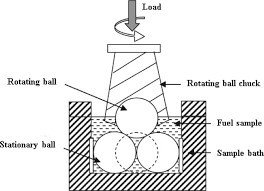 Lubricating oils and greases’ wear properties are determined using ASTM methods: D2266 for lubricating greases and D4172 for lubricating oils. The four-ball test method is used to make an initial assessment of the anti-wear properties of fluid lubricants in sliding contact. The four-ball test method shows how good a lubricant is at preventing wear, the more minute the wear scar the better the lubricant is at thwarting wear.

Unlike the extreme-pressure test, the four-ball wear test has set load, temperature, and rotational speed settings. The two procedures for D4172 both have the same temperature at 75 degrees Celsius and rotational speed at 1200 RPMs. Procedure A has a load per kilograms of force at 15 and Procedure B has a load per kilogram of force at 40. D2266 has the same temperature and speed parameters as D4172, but just has one load setting at 40 kilograms of force. All of the four-ball wear methods have the same time setting at 60 minutes.

The four-ball test, just like the extreme pressure test, has three steel balls that are clamped together and covered with either a lubricant oil or a lubricating grease. A fourth steel ball is then pressed into the steel balls with either a force of 15 kilograms or 40 kilograms. The test is then run for 60 minutes and the wear scars are measured using a microscope and computer software. The average wear scars are reported, and lubricants are compared using these average wear scars. The 4-ball data is great for discerning between varying lubricants with different physical properties such as wear protection, load-bearing capabilities, and friction reduction temperature and speed parameters as D4172, but just has one load setting at 40 kilograms of force. All of the four-ball wear methods have the same time setting at 60 minutes.

There are several ASTM methods that are used for the SRV test machine: Two of the more common methods are D5706 and D5707. D5706 uses a steel test ball oscillating against a stationary steel test disk with lubricant between them. The 100-N test load increments are increased until an incipient seizure occurs. The load, directly preceding the load at which seizure occurs, is measured and reported. D5707 examines a lubricating grease or lubricating fluid, using a test ball that is oscillated under constant load against a test disk. The wear scar on the test ball and coefficient of friction are then measured.

The technical team at Savant Labs has a deep understanding of wear testing. We can help you define a test slate and analyze the data in a concise and understandable format. Contact us for more information or request a quote for your next wear testing project.