Viscosity Loss - It's Only Temporary

This article focuses on temporary viscosity loss. Most multi-grade engine oils are non-Newtonian and their viscosity decreases with an increase in shear stress and, in the case of temporary loss, the oil returns towards its original value and bounces back as the shear stress is reduced. This type of loss is due to the deformation and rotation of the polymers under the influence of shear forces (Temporary Viscosity Loss or TVL). However, if the polymers are stretched beyond their ability to accommodate the motion of the oil, they will undergo permanent viscosity loss or PVL.¹ Both types of loss may negatively impact the engine. This happens due to increased vulnerability as the thermal, mechanical, and chemical interactions take place.

There are two effective test instrument types used to determine temporary viscosity loss, the HTLS-TBR and HTHS-TBS. The High-Temperature Low Shear True Basic Rotational Simulator Viscometer (HTLS-TBR) instrument measures the true viscosity (dynamic) and not a combined viscosity-density value (kinematic). The TBR maintains a constant shear rate from 1 to over 200 reciprocal seconds (sec-¹) depending on the speed setting and rotor size. The TBR analyzes fluids with viscosities ranging from 1 to 35,000 cP. For measuring higher viscosities, a different size rotor may be required. For automotive applications, the TBR has been found useful in measuring the viscosity of sooted diesel engine oils. In addition to engine oils, gear oils are also a candidate for  TBR measurements. Operating temperatures can be varied from 40ºC to over 200ºC.

The High-Temperature, High Shear Tapered Bearing Simulator Viscometer (HTHS-TBS) which is associated with several test methods, including ASTM D4683 and CEC L-36 for HTHS-TBS Viscosity at 150ºC, and ASTM D6616 for HTHS-TBS Viscosity at 100ºC. The D4683 method is included in the SAE J300 Engine Oil Viscosity    Classification System and the ILSAC GF series Engine Oil Specifications – the most recent being GF-6, API SP, and CK-4/FA-4 specifications. Additionally, ASTM D8185 In-Service Lubricant Viscosity Measurement Guide details how HTHS-TBS techniques can be useful to measure and monitor the viscosity of in-service lubricants. The design of the TBS permits the exact measurement (absolute) of the liquid’s resistance to flow, which determines the apparent fluid viscosity. The measurements of viscosity can be conducted at multiple shear rates of 50,000 to >7 million sec-¹ and temperatures from 40ºC to 200ºC. This proves useful with multi-grade engine oils and their influence on fuel efficiency. Using the HTHS-TBS at these high shear rates provides the necessary shear force needed to deform the polymer in the oil giving a viscosity value (temporary viscosity) without rupturing the macromolecular chains causing permanent viscosity loss. It is important to note the high shear-rate TBS instrument used by Savant Labs works precisely at a constant shear rate -- at whatever precise shear rate we select. Alternative high shear rate instruments based on capillary viscometry can only work over a limited range of shear rates. These shear rates simultaneously range from zero at the center of the flow to whatever maximum at the wall and the shear rate implied for the flow is actually an average and can only be truly averaged for a Newtonian fluid. 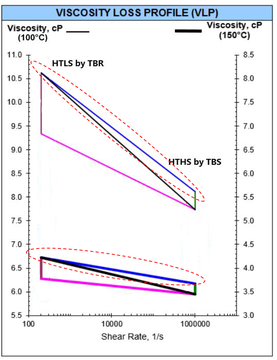 With the data from the TBS and TBR, the temporary viscosity loss can be determined as well as the Shear Stability Index (SSI). The application of HTHS and HTLS provides the Viscosity Loss Profile (VLP), which includes the temporary viscosity loss as well as permanent viscosity loss. The use of the VLP (shown here) contributes insight into the molecular weight distribution of oil-soluble polymers.² It also evaluates the total viscous influence of viscosity index improvers, synthetic fluids, and their combinations by comparing HTHS and HTLS viscosities both before and after shear degrading the oil. (The data points circled in the VLP graph identify the temporary viscosity loss data for this oil at both 100ºC and 150ºC temperatures.) Savant Labs understand the need for the industry to further evaluate the fuel-efficient benefits of engine oils in different environments within an operating engine. Most labs will only run under standard conditions. Using the HTHS TBS, Savant Labs have the ability to measure viscosities from 80ºC to as low as 40ºC in addition to the routine HTHS testing between 100ºC and 200ºC. With the experience and knowledge of the equipment manufacturer, Tannas Company, a sister company of Savant Labs, we have insights that other testing labs lack.