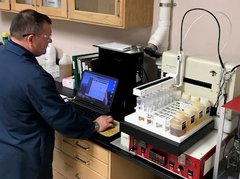 Shear stability is an important aspect of lubrication. Most multigrade lubricants are formulated with viscosity modifiers in order to increase the viscosity index (VI) to ensure the lubricant can provide a sufficient film thickness to protect the equipment or engine from wear. Viscosity modifiers (VM) tend to be polymer based chemistry that are susceptible to shear thinning. When a lubricant undergoes shear thinning, the viscosity of the fluid can be lowered by an entire ISO grade leaving moving parts in danger of wear or seizure. To ensure the stability of the fluid’s viscosity, tests are performed to analyze behavior under shear stress and temperature. 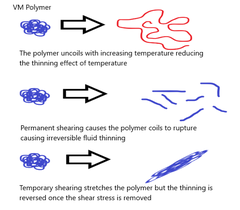 There are two types of viscosity loss from shear, temporary and permanent. Temporary viscosity loss is where polymers in the fluid are stretched which cause thinning. However, this thinning is reversible once the shear stress is removed. Permanent viscosity loss is not reversible as shearing the fluid causes breakdown of the polymer by rupturing the macromolecular chains. When the shear stress is removed, the viscosity remains lower and never returns to the level intended when the lubricant was formulated. Shear stability is a key attribute lubricant formulators work to optimize based on the requirements of the engine manufacturers as new technologies are developed.

We will discuss the equipment and methods used to induce permanent shear in order to study the shear stability of a lubricant. Three of the common instruments used to permanently shear-degrade lubricants are the Kurt Orbahn or Bosch Injector, Sonic Shear, and KRL (tapered roller bearing). 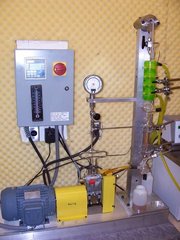 The Kurt Orbahn or Bosch Injector is associated with many methods differing mainly by the number of cycles the lubricant is passed through the injector. This test is designed to mechanically shear the lubricant. The lubricant is sheared when it is passes through a pintle orifice at a pressure of 13 to 18 MPa spraying and atomizing the oil in each pass. It is considered the least severe shearing method of the three discussed here. This method is typically used for engine oils and hydraulic fluids. Savant Labs offer ASTM D6278 Kurt Orbahn Shear Stability, 30 Passes and D7109 Kurt Orbahn Shear Stability, including 30 and 90 Passes. Both tests are ISO/IEC 17025:2005 accredited with this apparatus. Savant can also do custom testing to alter the number of cycles for other similar standards.

The sonic shear test irradiates the lubricant in a sonic oscillator for a set period of time. This test is often used in the hydraulic fluid industry for specifications. It has also been successfully applied to transmission fluids and tractor fluids. The shearing mechanism in this testing is cavitation of the fluid. This mechanism differs from the mechanical shear tests, but there is a good correlation when comparing the same VM additive or additives in the same or similar chemical family. Savant offers test methods ASTM D2603 Sonic Shear for Oils and ASTM D5621 Sonic Shear for Hydraulic Fluids. 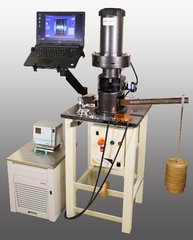 The KRL shear test uses a tapered rolling bearing in a cup fitted to a four ball instrument. Load is applied to the bearings as they are rotated at a certain RPM for a specified length of time. The test is typically run for 20 hours. KRL is considered to be one of the most severe shear tests and is used for driveline fluids and gear lubricants. The unit can perform standard methods such as CEC L-45-A-99, DIN 51350/6, and ISO 26422:2014. Savant offers CEC L-45-A-99 Modified for KRL testing. 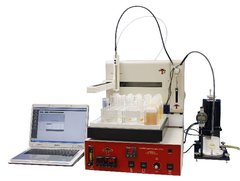 With each of the shear degradation methods, the viscosity is analyzed before and after the permanent shearing of the fluid. The fluid can be analyzed with ASTM D445 Kinematic Viscosity to determine the Permanent Shear Stability Index, per ASTM D6022. The fluid viscosity can also be analyzed under high temperature high shear (HTHS) conditions using the Tapered Bearing Simulator (TBS) and a low shear rotational viscometer.

Before and after viscosity values at both high shear and low shear rates are used to construct a Viscosity Loss Profile (VLP) from which the overall viscosity loss can be uniquely calculated and visualized. The VLP gives a simple visual appraisal of a fluid’s efficiency and effectiveness. Many examples of this data can be accessed through the Institute of Materials Online Database.

Test methods are often written to address a need for testing consistency across a range of lubricants or applications. When working on an application that requires testing at custom defined parameters, Savant Labs have extensive experience in running modified test methods and reviewing the data to ensure meaningful results. In just one example, a major lubricant supplier collaborated with Savant Labs to modify a test to simulate the harshest conditions an oil might experience in a specific application. The results instilled confidence in the supplier's formulation.

If you would like to discuss shear stability options or learn more about the testing capabilities available at Savant Labs, please contact us.