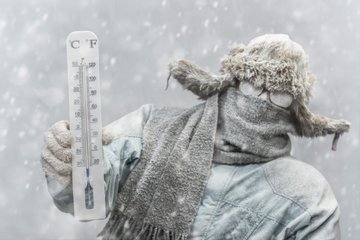 Our customers often seek to understand the performance of lubricants under cold temperatures at low shear rates and their rheological behavior under these conditions.  The Scanning Brookfield Technique (SBT) covers the measurement of the evident viscosity and the presence and scale of gelation structure, as indicated by the Gelation Index for oils at low temperatures. While the ASTM method D5133 for the SBT covers a range of -5°C to -40°C, our SBT instruments can run to temperatures as low as -60°C, when desired. The SBT test is run at a low shear rate of about 0.2 s-1, which results in shear stresses of <100 Pa. The Scanning Brookfield Technique involves using an SBT Bath, Viscometer set, and proprietary software, which continuously measures the resistance of the fluid to the rotation of a spindle as the temperature of the sample is reduced by 1°C/hour. This test supplies critical viscosity (flow limited) and gelation index (air binding) data throughout the desired temperature range in a single test. The temperature at which the viscosity goes beyond 40,000 mPa-s (cP) is meaningful for understanding pumpability.

Pumpability
The pumpability at low temperatures is affected by the oil’s chemical makeup. This includes the base oil composition, viscosity modifiers, and pour point depressants.  For example, a paraffinic base oil can potentially form wax crystals, which may then become agglomerated. The agglomeration of wax crystals forms a matrix within the oil that can impede pumpability and flow. This structure is known as gelation.  Oils with this issue of gelation and/or excessive viscosity can hinder adequate pumping of the engine’s lubricant soon after start-up at low temperatures, which could cause excessive wear or even possible engine failure.  Gelation can be manipulated by different techniques, such as proper selection of dewaxing oils, base stock selection, and/or additive oil treatments. 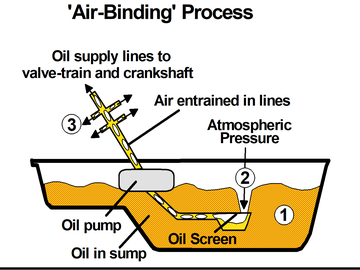 Flow-Limited pumpability concerns result when the oil’s viscosity is too viscous to flow adequately to the bearings, which can prevent the engine from starting.  Oils that reach 40,000 mPa-s (cP) have reached what is commonly referred to as the Critical Pumping Temperature (CPT).  This target has also been found to be effective in predicting conformity with SAE J300 engine oil viscosity classification for low-temperature performance.  Air Binding is the most devious form of pumpability failure where the oil forms a gelated mass in the crankcase which, in turn, permits air pressure to develop an air vortex reaching the pump inlet on initial start-up, leading to inadequately lubricated bearings and ultimate engine failure. The maximum rate of viscosity increase with respect to the temperature decrease is known as the Gelation Index.   Using the typical SBT temperature/ viscosity information, the Gelation Index is calculated by the first derivative of the MacCoull/Walther/Wright empirical equation.  The derivative values show peaks at the temperatures at which gel formation begins and these peak heights are shown to correlate with values of yield stress and the presence and severity of air-binding pumpability failure.  The temperature at which the Gelation Index occurs can be useful for inferring what structures may be forming at these low temperatures in a low shear rate environment. 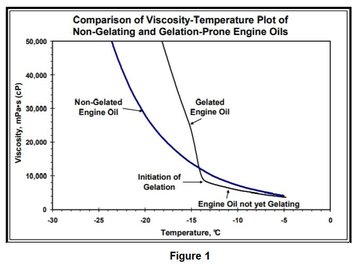 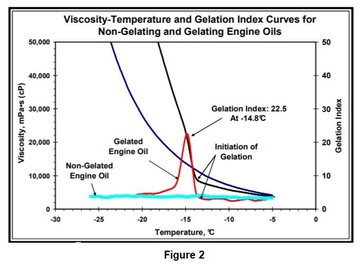 The graphs generated from the software at the conclusion of the test demonstrate the usefulness of the SBT test as the oil’s performance at low temperatures is captured and displayed for greater understanding. These data points are much more telling than one simple data point, which many viscosity tests offer. Based on our knowledge at Savant, an increased gelation result, beyond that of 6, may be more meaningful than a yield stress result from the MRV test.

The Procedure
The Scanning Brookfield Technique entails a specifically timed sequence of events, to include both heating and cooling steps. The timing of these steps has been shown to impact the results greatly, in some oils, especially in those with gelation values. The ASTM D5133 test method requires reporting of gelation values when determined to be greater than 6. If results are less than 6, no gelation or gelation temperature is reported. Current ILSAC GF-6 (A&B) specifications set the failing Gelation Index limit at 12 or above. The integrated software also displays temperatures of key viscosity points of 5,000 cP, 10,000 cP, 20,000 cP, 30,000 cP, and 40,000 cP.

SBT Testing at Savant Labs
Savant Labs have a vast history of viscosity testing, especially for the ASTM D5133 Scanning Brookfield Technique. With the experience and knowledge of the equipment manufacturer, Tannas Company, a sister company of Savant Labs, we have insights that other testing labs lack.

Given the critical importance of cold-temperature lubricant performance at low shear rates, formulators and users alike benefit from a robust understanding of fluid behavior under these conditions. The SBT provides exactly the information needed to develop this understanding.  Contact us for a quote or if you would like to discuss your next testing project.