Fuel Dilution -- The Cause, Effect, and Detection

Fuel Dilution is the thinning of engine oil by gasoline or diesel fuel. During the service life of the engine oil, some amount of fuel dilution is inevitable, but several factors can cause excessive dilution:

Some modes of service are inherently more prone to fuel dilution: Taxi fleets, emergency vehicles, and delivery trucks, for example, are all likely to experience excessive idle times and stop-and-go driving which are conditions that prevent the oil from warming enough to evaporate any accumulated fuel.

Gasoline direct injection (GDI) is another cause of fuel dilution. This is a relatively new fuel technology to improve engine efficiency by injecting fuel directly into the cylinder, allowing for tighter control of the combustion event. It can leave the engine more prone to dilution if the fuel washes past the rings into the oil sump.

The oil-fuel mixture is a problem that typically happens over a long period of time and is a factor that contributes to the amount of wear to the engine. If routine maintenance is overlooked, it could have detrimental effects on the engine.

While it is preferred that fuel does not mix with the engine oil, there are times when it happens, and it requires attention if it exceeds the guidelines.

Several methods are used to determine if fuel dilution is present, both qualitative and quantitative. One of the strengths of Savant Labs is our ability to combine test methods to improve understanding. Whether your application requires a direct test or a combination of tests, Savant Labs utilize innovative equipment and adhere to the rigorous application of ASTM and other industry standard test methods to meet your testing needs.

Fuel contaminated oil will exhibit viscosity loss when compared to fresh samples and can often be used as a predictor of a fuel dilution issue. Unfortunately, there are several other potential causes for viscosity loss, oxidation, and non-fuel contamination being common. This relegates KV to a screening test leading to more advanced analysis to diagnose fuel dilution, such as gas chromatography.

Flash point can be of value when determining if fuel is present when compared to a non-contaminated sample. The presence of fuel will result in a decrease of approximately 20 °C in the flash point temperature but is strictly a pass/fail test. Heavier fuels, such as biodiesel, ingress into oil and are much less likely to significantly alter the measured flash point.

FTIR testing, used to detect contaminants and byproducts, can detect the presence of fuel in the oil sample. However, a fresh sample is required to determine the baseline and then it can be determined if fuel is present on the spectrum. It is, however, very difficult to distinguish between the fuel hydrocarbons and those in the oil. 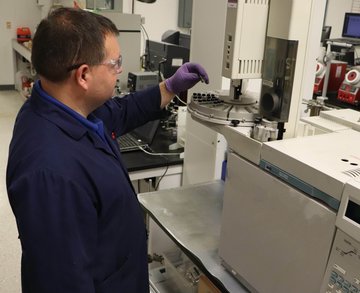 The most widely accepted analytical technique for the determination of fuel dilution is gas chromatography (GC). Oil is injected into a GC system that vaporizes the sample. The sample, which is now in the gas phase, is then separated by the analytical column by boiling point and quantitated using a flame ionization detector. The amount of fuel present is reported as a mass % of the fuel detected in the oil. The formalized methods ASTM D3524 for diesel fuel and ASTM D3525 for gasoline fuel dilution all have well-documented levels of precision which can be met by well trained, experienced operators here at Savant Labs.

Fuel dilution can have a detrimental effect on the life of an engine. There are several ASTM methods available to measure fuel dilution, however, it depends on the application, and Savant Labs team of dedicated chemists and technicians will recommend the appropriate testing.  In addition, the team is here to interpret and provide insights into the results. Contact us for your testing needs.